The fallout from the U.S. Supreme Court’s decision in Riley v. California, 134 S. Ct. 2473, 189 L. Ed. 2d 430 (2014), has already changed police practices regarding the search and seizure of a cell phone that is held incident to an arrest. Before Riley, a police officer could search the cell phone of an arrestee for incriminating information or to expose the identities of accomplices. The Riley decision held that “[m]odern cell phones are not just another technological convenience. With all they contain and all they may reveal, they hold for many Americans ‘the privacies of life.’” The fact that technology now allows an individual to carry such information in his hand does not make the information any less worthy of the protection for which the Founders fought.” Riley, 134 S. Ct. at 2495. In so doing, the court made clear that the vast quantities of personal information could only be searched when accompanied by a proper warrant.

However, recent advances in encryption technology are out-pacing the ability of courts and legislatures to adapt, increasingly putting the contents of smartphones outside the reach of the police and courts even when searches are authorized by warrant. The stated aim of this new technology is to “lock out the government,” regardless of the Riley decision.

Apple, maker of the iPhone, which uses the iOS software platform, has upgraded its encryption standard to the point that it claims is “unbreakable,” and the company does not have the ability to unlock a user’s phone even when requested to do so by government entities. Google, which distributes the competing Android platform to smartphone manufacturers, has also decided to encrypt its phones by default.

This has lead to a situation that the FBI has termed “The Black Box” or “Going Dark.” The argument goes, that if a smartphone cannot be accessed even under a lawful court order, then kidnapped children will go un-rescued and drug kingpins will go un-caught. Criminals’ secrets can then be stored worry-free, in these “black boxes” far from the reach of the police and courts. The FBI has gone so far as to demand that the tech companies implant “back door” access for police and courts to ensure continued access to users’ data.

The tech companies have responded that such scare scenarios are “inflammatory and inaccurate,” and that any “back doors” provided to the government would inevitably be exploited by opportunistic hackers. They point out that the “metadata,” data about who a person calls and texts from a smartphone, is accessible elsewhere, and that society’s expectations of privacy have fundamentally changed as more and more people shift a greater portion of their private lives onto their smartphones.

The editorial commentary in the media has come down strongly on the side of the technology companies. Wired further notes that “none of the criminal cases cited by [FBI Director] Comey meet that hypothetical because in real life those instances would be extremely rare and far outweighed by the clear public benefit of preventing the very real threat of a large-scale data breach that could affect millions of Americans.”

In the ongoing debate between security and privacy, the inexorable forward march of technology may leave the courts behind.

Students were broken into groups, and each group participated in various skits demonstrating the appropriate responses during police street stops, stop and frisks, car searches, cell phone searches and more. While extremely amusing, the skits were followed by an important presentations during which students addressed legal issues involved in each of the skits. One of the problems is that many people do not know their rights and the available appropriate responses. The students’ skits conveyed the importance of being an informed citizen.

Think of some of the following statements and ask yourself if you know the answer:

These are few of the questions that plague our justice system on a daily basis, which is why it is important to be aware of our rights, especially as young students in the midst of a technological revolution.

It is no secret that we live in an era where technology is rapidly changing. However, the law has not yet reached the 21st century, so there are many unsettled situation. In the meantime, our court systems battle these complex issues on a daily basis that arise with the advent of new technology. Think about the issues regarding cell phones searches, GPS devices, computers, social media, etc…. How is the law to handle the use of technology and searches while not infringing on person’s expectation of privacy? This is where the difficulty lies. We know that during a car stop, a police officer is allowed to search whatever is in plain view. On the other hand, what is the protocol for searching a computer that is left open and unattended? A cell phone that is seized? Can information found on social media websites be used against a person, and if so, how? What if the social media site is set to private? Do levels of privacy differ on the Internet? Should the same procedures currently applied in searches of cars, houses or people be applied to technology? These are some of the questions presenting much difficulty in articulating new laws.

For now, Riley v. California, decided just this year, is the only precedent we have regarding cellphone searches incident to arrest. An officer may seize a cell phone from an individual after his/her arrest, but may not open the phone or search through the phone without a valid search warrant. Here is an interesting excerpt from the Supreme Court decision: “Cell phones differ in both a quantitative and a qualitative sense from other objects that might be carried on an arrestee’s person. Notably, modern cell phones have an immense storage capacity. Before cell phones, a search of a person was limited by physical realities and generally constituted only a narrow intrusion on privacy. But cell phones can store millions of pages of text, thousands of pictures, or hundreds of videos” Riley v. California, 134 S. Ct 2473, 2478 (2014). It is clear that new law is warranted, but it must be balanced against our expectation of privacy.

The Know Your Rights event was an eye opener. It would be interesting to see how this event can be incorporated into the public or in other schools, perhaps even high schools. I think it would be an extremely informative and fun experience for young adults to become informed about what is unfolding around them. Personally, I was made aware of the consequences of the technology that we as a society have become so obsessed with and reliant on, while also realizing that the courts face a huge task of creating new laws addressing these new issues. I would urge everyone to become informed not only as to their own rights but also about what is currently being debated in our courts, because we will be the ones who will become affected in the future by the laws that are being created at this moment.

For your convenience, take a moment to begin and read the Know Your Rights! Top Ten Takeaways compiled by Professor David N. Dorfman. 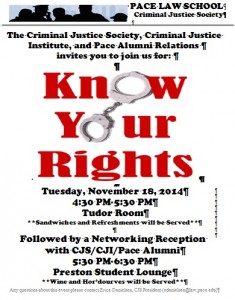 The Pace Criminal Justice Society (CJS), the Pace Criminal Justice Institute (PCJI) and the Pace Alumni Relations Office are co-hosting an event titled Know Your Rights on Tuesday, November 18, 2014 at 4:30-5:30 PM in the Preston Hall Tudor Room during which our Criminal Justice Clinic Students under the leadership of Prof. David N. Dorfman will explore the appropriate responses to and the underlying issues that arise from police car stops, street stops, cell phone searches and more. Immediately after this event, the Annual Criminal Practice Networking Reception will take place at 5:30-6:30 PM in the Student Lounge, across the hall from the event, during which alumni, local prosecutors and defense counsel are invited to learn about the resources of the Pace Criminal Justice Institute, meet with other criminal law practitioners, and get to know and talk with students interested in pursuing a career in criminal practice.