The Honorable Jed S. Rakoff, Senior Federal District Judge serving on the Southern District of New York, is one of the most distinguished federal judges and one of the most outspoken on criminal justice issues. A previous PCJI post reported on Judge Rakoff’s recommendations for the process of plea-bargaining. In November 2014, the judge addressed this issue further in an article he wrote for the New York Review of Books.

Prior to assuming the bench in 1996, Judge Rakoff was a federal prosecutor in the Southern District of New York, where he served as Chief of the Business and Securities Fraud Prosecutions Unit. He subsequently entered private practice and worked, among other assignments, as a defense lawyer on securities law prosecutions.

In an article published in the May 21, 2015 issue of the New York Review of Books, Judge Rakoff thoroughly reviews the issue of mass incarceration in the United States. The judge recently addressed this issue further in a speech he delivered at a conference at Harvard Law School in April 2015.

Judge Rakoff attributes these statistics in large part to strict sentencing laws adopted, beginning in the 1970s, by Congress and State legislatures. These laws, which included mandatory minimum sentences for both violent and non-violent crimes, were intended to reduce the high rate of violent crime the U.S. was experiencing in the 1960s and 1970s. “The dictate common to all these laws,” the judge writes, “was that, no matter how minor the offender’s participation in the offense may have been, and no matter what mitigating circumstances might be present, the judge was required to send him to prison, often for a substantial number of years.”

In the years following adoption of these laws, the U.S. crime rate significantly declined. “The unavoidable question,” Judge Rakoff says, is whether the decrease in the U.S. crime rate can be attributed – either wholly or at least in some part – to the adoption of these strict sentencing laws. Judge Rakoff reviews several analytical studies that attempt to answer this question. The judge notes that the answer to this question is especially important because of the social effect of these laws: “by locking up so many young men, most of them men of color, we contribute to the erosion of family and community life in ways that harm generations of children, while creating a future cadre of unemployable ex-cons many of whom have learned in prison how better to commit future crimes.”

Judge Rakoff’s conclusion from the evidence presented, and the claims made, in these studies is that “one cannot fairly claim to know with any degree of confidence or precision the relative role of increased incarceration in decreasing crime.”

To rebut public belief to the contrary, the judge writes that

those whom the public does respect should point out why statutes prescribing mandatory minimums, draconian guidelines, and the like are not the solution to controlling crime, and why, in any case, the long-term price of mass incarceration is too high to pay, not just in economic terms, but also in terms of shared social values.

Women in New York State prisons face many challenges. Women’s rights to reproductive health care and obstetrics and gynecology (OBGYN) treatment are often not protected and even violated. The Correctional Association of New York (CA), an independent, non-profit criminal justice advocacy organization, aims to create fair and humane criminal justice system in New York, and as such a safer and more just society for all. Created in 1991, the CA’s Women in Prison Project (WIPP) works to reduce the overuse of incarceration for women, ensures that prison conditions for women are as humane as possible, and aims to create a criminal justice system that treats all people and their families with fairness and dignity.

On April 1, 2015, we attended the Pace CJI event on the Rights of Incarcerated Women in New York State Prisons, which focused on the recently published report by the WIPP of the CA titled Reproductive Injustice: The State of Reproductive Health Care for Women in New York State Prisons. This report focuses on the New York State Department of Corrections and Community Supervision (DOCCS) that oversees the operation of all state prisons in New York. The report highlights and outlines the challenges incarcerated women face as a result of mistreatment by medical personnel and correctional officials as well as the inadequacy of policy-making in New York State. The report concludes that incarcerated women receive substandard OBGYN care, including the fact that pregnant women are still being shackled pre-, during and post- labor, even though the N.Y. Correc. Law § 611 (McKinney 2015) (also known as the NYS 2009 Anti-Shackling Law) prohibits the use of restrains of any kind when a “woman is in labor, admitted to a hospital, institution or clinic for delivery, or recovering after giving birth.”

WIPP is currently working to amend the 2009 Anti-Shackling Law to incorporate mechanisms that would ensure compliance with the laws by correctional officers. Among these mechanisms are:

One of the panelists shared a story about a woman who gave birth in a correctional facility:  the woman was in pain for 25 hours before the correctional officers believed that she was in labor.   She also described her personal experience of giving birth while incarcerated. During her childbirth, she was told to “shut up” by correctional officers on the way to the hospital while her contractions were 2 minutes apart.  Additionally, most incarcerated mothers are separated from their newborns immediately after birth unless they are fortunate enough to get into the nursery program.

Moreover, many women in prison have been victims of sexual abuse or assault; thus, being subjected to substandard OBGYN care often re-traumatizes them.  One of the panelists described how she was a victim of sexual abuse, and how having male correctional officers present during her OBGYN visits made her feel re-victimized. The CA’s report confirms that DOCCS does not provide medical care that is “trauma informed,” meaning that medical personnel in prisons are not trained in how to recognize and understand the impact of trauma on incarcerated women and how to provide care without re-traumatizing their patients. This is an issue that should be addressed in the future because incarcerated women should not have to re-live their psychological and physical harms of their past.

Another panelist also shared her experience with NYS’s unequal approach to offering plea bargains at arraignments to men compared to women.  According to her,  men are more likely to receive plea bargains at arraignment than are women: in fact,  she had never met a woman who was offered a plea during the arraignment stage.  Her personal experience, if proven true, raises the question of inequality and gender bias during the criminal process, which should be addressed.

Although a difficult topic to talk about, the CA panel was a great success in making all attendees think critically about the disparate treatment of incarcerated women in NYS prisons. The CA panel raised two key issues that need to be addressed:

The CA panel was important because it appeared that some attendees were made aware of these issues for the first time. Holding panels such was this one is an integral and valuable part of a law school education because continuous discussion and education about such issues is the first step to effecting change. 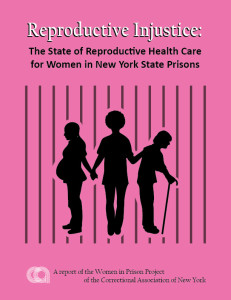 A recently published report by the Correctional Association of New York, Reproductive Injustice, addresses the reproductive health care for women in New York State prisons.  The Report was commented on here by Pace Prof. Michael Mushlin and  has sparked debates across the state. Please join PILSO (Public Interest Law Student Organization at Pace)and the CJS (Criminal Justice Society at Pace) on Wednesday, April 1, 2015 at 12:30 pm – 1:30 pm in Tudor Room of Preston Hall at Pace Law School for a panel discussion on the rights of women in NYS prisons.

The event features an exciting line-up of panelists including:

Join us for a thought-provoking discussion and learn how to get involved. Refreshments will be served!

The Ninth Circuit recently upheld a due process challenge to an ATF sting that targeted the poorest minority neighborhoods in Phoenix to court individuals – with a promise of riches – to break into and rob local fictitious, non-existent stash houses.  Many of these individuals had no criminal records; almost all were out of work and poor.

Recent studies have estimated that between 2.3% and 5% of all prisoners in the United States are factually innocent. According to the Innocence Project, if just 1% of all prisoners were innocent, that would mean that more than 20,000 innocent people are currently in prison. Of course, one would assume that such staggering numbers would prompt some type of national examination to determine why the criminal justice system is continually breaking down.  At the very least, the continued unveiling of wrongful convictions nationwide must lead to some type of reform that would prevent future injustices from occurring. Unfortunately, the Criminal Justice system has failed miserably in its attempts to deal with these issues, despite its realization that wrongful convictions continue to occur. As Professor Bennett L. Gershman of Pace Law School recently noted

there is hardly ever a postmortem of a derailment in the criminal justice system, as there typically is when a train derails, or a plane crashes.

Professor Gershman’s editorial, Don’t Let the Prosecutor Off the Hook, discusses how the justice system has simply forgotten to undertake its duty to determine the causes behind this tragic epidemic that has continually plagued our justice system. Citing the recent exoneration of Jonathan Fleming, who had spent 24 years in prison for a murder that he did not commit, Professor Gershman explained

Evidently, there are probably thousands of cases in which an innocent person has been convicted. Yet, the process of finding answers or solutions to the systemic flaws causing wrongful convictions has been a snail’s race.  As Professor Gershman implicitly points out, however, the prospect of finding a solution is undermined by society’s passive approach to the problem. Moreover, the likelihood of successfully confronting this important issue can never be truly realized until the wrongdoers are actually held accountable for their actions and no longer allowed “off the hook.” Of course, as Prof. Gershman notes, the first step will be to simply “ask probing questions about how this human tragedy could have happened?”