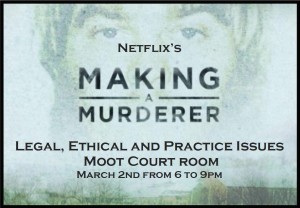 Please join the Pace Criminal Justice Institute (PCJI) on Wednesday, March 2, 2016 at 6:00-9:00 PM in the Pace Law School Moot Court Room for an event: Legal, Ethical and Practical Issues: A Panel Discussion on the Netflix Documentary Series ‘Making A Murderer’. Join us as panelists including Professors Carol Barry, David Dorfman, Lissa Griffin, Jill Gross, and alumnus Chris McNerney (’06), Chief of Greenburgh Police, discuss the legal and ethical issues raised by this documentary. Attendees can earn up to 3.5 CLE credits (1.5 ethics and 2.0 professional practice).

Please join the Pace Criminal Justice Institute (PCJI) on Wednesday, March 2, 2016 at 6:00-9:00 PM in the Pace Law School Moot Court Room for an event: Legal, Ethical and Practical Issues: A Panel Discussion on the Netflix Documentary Series ‘Making A Murderer’. Join us as panelists including Professors Carol Barry, David Dorfman, Lissa Griffin, Jill Gross, and alumnus Chris McNerney (’06), Chief of Greenburgh Police, discuss the legal and ethical issues raised by this documentary. Attendees can earn up to 3.5 CLE credits (1.5 ethics and 2.0 professional practice). 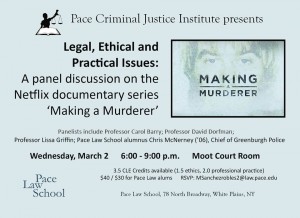 Please join the Pace Criminal Justice Institute on Wednesday, March 2, 2016 at 6:00-9:00 PM in the Pace Law School Moot Court Room for an event: Legal, Ethical and Practical Issues: A Panel Discussion on the Netflix Documentary Series ‘Making A Murderer’. Join us as panelists including Professors Carol Barry, David Dorfman, and Lissa Griffin, and alumnus Chris McNerney (’06), Chief of Greenburgh Police, discuss the legal and ethical issues raised by this documentary. Attendees can earn up to 3.5 CLE credits (1.5 ethics and 2.0 professional practice).

“Making a Murderer,” the Netflix series about Steven Avery, who may or may not have murdered Theresa Halbach in a rural Wisconsin town, has created a healthy controversy. Everybody is asking: “Did he do it? Or was he framed by the police?” Avery served eighteen years in jail for a crime he did not commit until he was exonerated by DNA evidence in 1999. His multi-million dollar lawsuit against the county, he alleges, is the motive for the police charging him with murder. Avery, along with his nephew Brendan Dassey, a mentally-challenged teenager, were convicted in separate trials.

The 10-part series is controversial. The documentarians are accused of biased reporting intended to prove the defendants are innocent. But that’s unfair;  ultimately, the series  demonstrates something true and more important: that despite the guilty verdicts we really do not know who killed Halbach, how, or why. The prosecution presented a strong circumstantial case, but this evidence is carefully dissected, and a viewer can readily believe that what little there was had been planted by the police. Moreover, Dassey’s “confession” in which he “guessed” at what the police wanted to hear, and later repeatedly recanted, is utterly uncorroborated by anything the police could find and appears to be the unreliable product of well-known unsavory police interrogation tactics.

We should broaden the debate beyond guilty or not guilty,  because “Making a Murderer” raises several fundamental questions about the criminal justice system.

First, what is the goal of our system? Is the goal to yield results that society is willing to accept? To be sure, we hope the adversary system and the use of juries lead to reliable results. But we know that, as the documentary shows, tragic mistajes are made, eyewitnesses are mistaken, and that the most we can ever hope for is uncertainty.  Is that enough?

Does the criminal adversary system really produce a fair fight? Avery’s retained lawyers worked incredibly hard, were unstintingly loyal, and were highly effective. Dassey was indigent and was assigned an attorney who, from the beginning, believed and announced that his client was guilty despite Dassey’s protests of innocence, and in fact,  handed the prosecution evidence to use against him. After this attorney was removed, new counsel was appointed and did the best he could. But once again we revisit the age-old maxim that the quality of justice depends on how much money you have.

Did the prosecutors perform their constitutional duty to be “ministers of justice”? Whether one buys the claim that Avery was framed, it’s clear that the prosecutor accepted whatever came from the police without any independent reflection. Even after the court ordered the local police to stay out of the investigation, they stayed deeply involved and produced the only “evidence” of guilt. The prosecutors believed Dassey’s fantastic tale of bloodthirsty sexual assault even though not a drop of blood or any other forensic evidence could be found to support it. Moreover, disregarding his ethical obligations, the prosecutor repeatedly made highly prejudicial statements to the media revealing extensive inflammatory details about the crime.

A few other thoughts. The absence of any racial issues – everyone involved is Whites – simplifies the legal and policy questions raised by the film. This is an excellent opportunity. But in their place we see issues of class and culture at play in a small rural community in middle America, a culture we really can’t penetrate. How do rumor, personal history, kinships, friendships, and resentments impact the quality of justice here?

In the final analysis, nobody really knows why or how Theresa Halbach died. Avery may be innocent, a degenerate, or a predator; Dassey may be no more than an immature, mentally-deficient teenager. They may have killed her, or maybe they did not. The title alone raises the provocative question: did the police “make” a murderer by framing a case against Avery? Or did society “make” a murderer by wrongly imprisoning a young man for eighteen years on the basis of a single mistaken identification? One can always fault the messengers, but the series raises important questions.